Posted September 9, 2012 by Christy || 5 Comments
Tab Bennett and the Inbetween by Jes Young 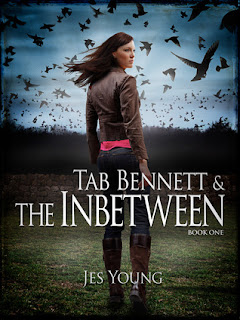 Yesterday Tab Bennett was a bank teller. Today she’s at the center of a centuries old war between Light and Dark. Tomorrow…well let’s just say she’ll be lucky if she lives to see it.

Engaged to her childhood sweetheart, employed at the local bank, and finally living on her own for the first time at twenty-four years-old, Tab Bennett has no interest in a fairy tale life. She’s perfectly happy with the normal one she already has. But when her sister is murdered on a moon-dark night, revealing a world of power and magic she never dreamed existed, a fairy tale is exactly what her life becomes. Figures it would have to be the Grimm kind.

Just like that, the life she had planned is over. Instead of cashing checks and handing out lollipops, Tab is unraveling clandestine assassination plots and learning to wield the magic that is her birthright. And as if fulfilling her destiny isn’t hard enough, she’ll also have to choose between Robbin, a man who’s turned out to be a lot more complicated than the proverbial boy next door, and Alexander, the handsome prince whose smile leaves her weak-kneed and weak-willed.

Now, while Tab struggles to hold on to the human world she’s always known and understand her place in the magical one she’s just discovered, dangerous forces are gathering close to home. If she wants to live to see happily ever after, she’ll have to figure out who she can trust, who wants her dead, and why. The answers will change everything she believes about herself, the people she loves, and the place she calls home.

On the outside Tab Bennett seems like your ordinary 24 year old bank teller; she’s engaged to her high school sweetheart and up until recently everything has been perfect.  But Tab has a unique physic gift.  Well, I’m not sure that I would call it a gift; I think curse is more accurate.  Tab knows the exact moment when someone that she loves dies and she actually witnesses their death through visions.
During the past three months, all three of her sisters have gone missing and through her visions she has watched each of them die and there’s nothing she can do to stop it.   Since Tab is now the last Bennett girl alive she knows that she is next.
On the day of her sisters’ funeral, Tab learns that everything isn’t what it seems, including her and her family.  Tab is about to find out who and what she really is.  On this day that she should be grieving her sister, she not only learns that she was meant for someone other than her fiancé but she also isn’t human.
I have to say that this book isn’t what I thought it would be from reading the first chapter.  I thought it would be more of a mystery book, since we start off with Tab witnessing her sisters’ murder and I really wasn’t expecting the love triangle to be as big as it was or Tab’s reaction to Alex at the funeral.  But overall, I enjoyed this book and I plan to read the next one.

5 responses to “Review: Tab Bennett and the Inbetween by Jes Young”