Posted July 26, 2012 by Christy || 1 Comment
The Catastrophic History of You and Me by Jess Rothenberg 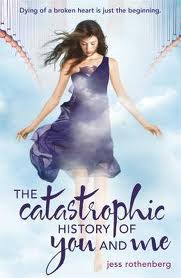 Dying of a broken heart is just the beginning…Welcome to forever.
Brie’s life ends at sixteen: Her boyfriend tells her he doesn’t love her, and the news breaks her heart-literally.
But now that she’s D&G (dead and gone), Brie is about to discover that love is way more complicated that she ever imagined.  Back in Half Moon Bay, her family has begun to unravel.  Her best friend has been keeping a secret about Jacob, the boy she loved and lost-and the truth behind his shattering betrayal.  And then there’s Patrick, Brie’s mysterious new guide and resident Lost Soul…who just might hold the key to her forever after.
With Patrick’s help, Brie will have to pass through the five stages of grief before she’s ready to move on.  But how do you begin again, when your heart is still in pieces?

First, I want to say that the cover for The Catastrophic History of you and me is absolutely gorgeous and what’s inside is even better.  This book captivated me from the very first page and never let go.
Brie is a fifteen year old girl who just died of a broken heart (I don’t mean the ‘if I can’t have him then I don’t want to live so I’ll commit suicide’ kind, I mean ‘the heart broke straight down the middle in two perfect halves’ kind) when her boyfriend Jacob told her that he didn’t love her.
After Brie attends her own funeral, she ends up on a bus headed to nowhere with no idea how she got there and a bus driver who doesn’t give any answers.   When Brie gets off the bus in ‘Forever’ she goes into a pizza parlor called Slice of Heaven and this is where she meets Patrick, who is extremely sarcastic and decked out in 80s wear.  As the story went on I realized that not only is Patrick insanely funny and amazingly sweet, he’s also keeping something from Brie, something that could change everything.
In order to move on, Brie has to come to terms with her death and along the way she realizes that everything isn’t always what it seems.  The secret her best friend was keeping from her about her ex is not what she expects, she’s so busy being angry about what she thought she lost that she doesn’t realize what’s right in front of her.
The Catastrophic History of you and me is about life and love after death, it’s an excellent read with quite a few twists that you won’t see coming.  I have to say that this is one of my favorite reads so far this year; Jess Rothenberg is definitely an author to look out for.

One response to “Review: The Catastrophic History of You and Me by Jess Rothenberg”