Please welcome author Cait Spivey!
Name: Cait Spivey
Website: caitspivey.com
Tell us a little about yourself: I’m an author and freelance editor living in the US Pacific Northwest with my husband and the cutest dog ever. I love speculative fiction, especially paranormal, horror, and high fantasy. Obviously I’m a lover of all things book related; I’m also really into theater and art, though I have less and less time to pursue those interests these days. 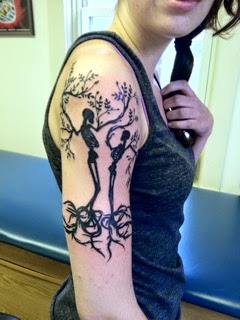 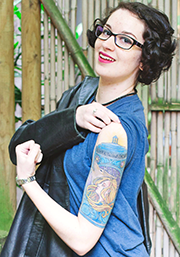 The leaf and the skeleton tree are both immediately post-inking pictures, and the TARDIS one is from my engagement photos early in 2014.
When did you get your first tattoo? I got my first tattoo, the Leaf of Lorien, in the summer of 2010, right after I turned 21. My family actually had a friend who was a tattoo artist and hadn’t set up with a shop yet, so he did house calls for us. My best friend and I got tattooed at home together. I got it in a place I could hide because at the time, it felt very radical.
When did you get your last tattoo? My most recent tattoo, my TARDIS, was completed in June of 2013. It took several sessions, each of which were upwards of five hours. My artist was great; he was just as excited about the tattoo as I was. Alas, that was right before we moved across the country, so I have to find a new artist now.
Do you have a favorite? I love all my tattoos, but I’m probably proudest of the TARDIS tat. That’s the one I like to show off.
Is there a special meaning behind any of your tattoos? The two nerdy ones, the TARDIS and the Leaf of Lorien, represent my love of stories, but it doesn’t really get much deeper than that.
Are you planning to get anymore? (You can also include pictures of ones you are thinking of getting) Oh, I have a whole list. Tattoos planned for YEARS. The next one I want to get is “Hello Sweetie” across my chest in traditional tattoo font, and then I want to fill out the underside of my TARDIS half-sleeve.

Tell us a little about your books/blog: I like to mix fantasy and horror in my books, and I like to write about characters coming face to face with their dark sides. Some of them give in, some of them don’t; I like to keep things complicated, haha. As of now I’ve published two novellas in my WEB series, I SEE THE WEB and A SINGLE THREAD. Both novellas can be read as stand-alones, but these and the next two WEB novellas are essentially origin stories for a cast of overlapping characters that will appear in later novels.
Is there anything else you would like to add? 2015 has just started but I already have big things planned! Including, hopefully, another tattoo. Anyone who wants to stay up-to-date can sign up for my monthly newsletter here: http://eepurl.com/-Q-MX
﻿ 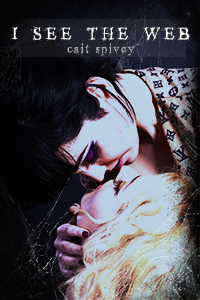 Seventeen-year-old Erin has a lot to look forward to, even if it suddenly seems like everywhere she turns there’s a spider staring at her. She’s finally out to her friends and family, surprising exactly no one. When Dawn, the love of her tender teenage dreams, corners her in the library, a whole new world opens up to Erin. From here on out, it’s all make-out sessions with her beautiful girlfriend in rooms stacked high with books.

Until the spiders start whispering.

Turns out the spiders aren’t just stalking her for kicks. They need her to be their voice, their vessel, whatever that means. But their timing is crap, because there’s no way Erin is giving up her human life just when things are starting to get amazing. Too bad the spiders just won’t quit. Like it or not, Erin will have to choose, and it won’t be nearly as easy as she thinks. 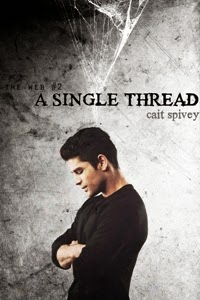 It’s been two weeks since Morgan Fletcher’s little sister, Erin, disappeared before his eyes in a flurry of spidersilk and blood. Probability says she’s dead; but when Erin comes to him in a dream, Morgan’s eyes are opened to a level of reality where probability doesn’t mean jack. His sister sees the web of time, and she’s got news for him: trouble is coming.

A cryptic riddle and flashing images of the future are all Morgan has to go on in order to save a mystery boy from a gruesome death. That’s if he even believes what’s happened to Erin. Is her spider-whisperer persona for real, or has his grief at losing her caused him to totally crack?

With a life at stake, Morgan isn’t taking any chances. Madness or no madness, he has to solve Erin’s riddle before it’s too late.

Buy links-
Direct: https://caitspivey.selz.com (.mobi/.epub)
Amazon author page: http://www.amazon.com/Cait-Spivey/e/B00OS9S5RE
B&N author page: http://www.barnesandnoble.com/c/cait-spivey
Smash words author page: https://www.smashwords.com/profile/view/CaitSpivey
Thanks for stopping by today, Cait!  We really enjoyed seeing your ink!
If you are an author or blogger with a tattoo and are interested in being our guest on INKED, you can find all of the information HERE.

Follow Us!
Ink Ladies
Christy, Erica, Madalyn & Beeare fond of books, if you couldn't tell. These Ink Ladies have their own quirky personality but when you put them together they could dominate the world (or so they like to think)!

Follow Us!
Latest posts by Ink Ladies (see all)