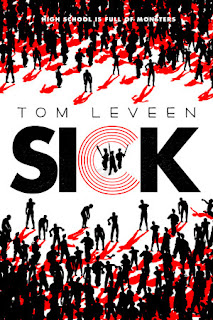 Breakfast Club meets The Walking Dead as a group of unlikely allies tries to survive a deadly outbreak.

Brian and his friends are not part of the cool crowd. They’re the misfits and the troublemakers—the ones who jump their high school’s fence to skip class regularly. So when a deadly virus breaks out, they’re the only ones with a chance of surviving.

The virus turns Brian’s classmates and teachers into bloodthirsty attackers who don’t die easily. The whole school goes on lockdown, but Brian and his best friend, Chad, are safe (and stuck) in the theater department—far from Brian’s sister, Kenzie, and his ex-girlfriend with a panic attack problem, Laura. Brian and Chad, along with some of the theater kids Brian had never given the time of day before, decide to find the girls and bring them to the safety of the theater. But it won’t be easy, and it will test everything they thought they knew about themselves and their classmates.

I am a HUGE fan of The Walking Dead, so when I saw that this book was recommended for fans of that show, I immediately added it to my wishlist and requested it on Netgalley because there was no way that I could wait until it’s release date to read it. While this book is as amazing as The Walking Dead, it’s still a really good book that is very engrossing.
This book centers on Brian and his group of friends as they try to survive an outbreak of zombies at their school. But the thing about their school is that it’s fenced in with a gate that stays locked 99 percent of the time so it will be very hard for them to get off of school grounds without being eaten by the other students.
This book isn’t like the ordinary zombie books that I have read in the sense that it doesn’t start out with the outbreak having already occurred. In this book, we get to witness everything that happens while leading up to the epidemic. Also, the zombies are a little bit different in this book. Yes, they still attack and eat you and they are really hard to kill since they don’t feel any pain but there is a few differences in them. What kind of differences? You’ll have to read the book to find out 😉
Sick has amazingly strong characters, I was actually surprised how brave they were considering that they were all still in high school. Brian was just awesome, all he could think about was getting to his sister and making sure that she was ok. Chad really astonished me, at the beginning I thought that he was just going to be a troublemaker. But, as it turns out, he was the bravest of them all. That’s really all that I can say without giving anything away.
Overall, Sick is a great addition to the horror genre. It was gripping and very fast-paced. If you like zombie books and don’t mind blood and gore, then you should definitely give this book a chance.