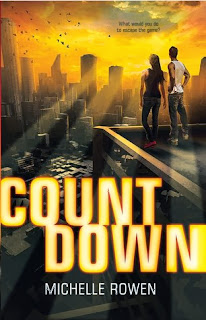 3 seconds left to live. Once the countdown starts, it cannot be stopped.
2 pawns thrown into a brutal underground reality game.

Kira Jordan survived her family’s murder and months on plague-devastated city streets with hard-won savvy and a low-level psi ability. She figures she can handle anything. Until she wakes up in a barren room, chained next to the notorious Rogan Ellis.

1 reason Kira will never, ever trust Rogan. Even though both their lives depend on it.

Their every move is controlled and televised for a vicious exclusive audience. And as Kira’s psi skill unexpectedly grows and Rogan’s secrets prove evermore deadly, Kira’s only chance of survival is to risk trusting him as much as her instincts. Even if that means running head-on into the one trap she can’t escape.

When I first read the summary for this book, I was very intrigued. It sounded like it was a fast-paced, action galore kind of book. And it was. When I picked this book up, I was hooked immediately, and I couldn’t put it down. I was so caught up in this world that I just had to know what happened next.
Sixteen year old Kira Jordan is doing her best to survive after her family was murdered two years ago. She survives by picking pockets and she is excellent at it. That is until she picks the wrong one. Seventeen year old Rogan Ellis is doing time for multiple counts of murder in a juvenile detention center. He is set to move to a maximum security prison upon his eighteenth birthday. So, when he gets offered a chance to compete in a life or death game with the chance of winning and getting his named cleared, he jumps at the chance.
Unlike Rogan, Kira doesn’t know anything about the secret game called Countdown, until she wakes up chained in a room with Rogan. Kira and Rogan are placed together as a team and they quickly realize that their fate lies in the others hands.
I have to admit that I was surprised by how strong of a person Kira was. I mean, her family was brutally murdered when she was only fourteen years old, so you would think that that happening would have made her fragile, but instead it forced her to grow up and realize that she only had herself to depend on. Rogan was such an amazing character. That boy has been through so much in his seventeen years and a lot of it wasn’t even his fault but he didn’t let it change who he was inside.
Overall, Countdown was an amazing adventure that didn’t have a dull moment throughout the entire book. This book was like Saw, The Condemned and The Hunger Games all rolled into one. If you like your books with a strong MC, non-stop action and a little bit of romance on the side, then this book is for you.