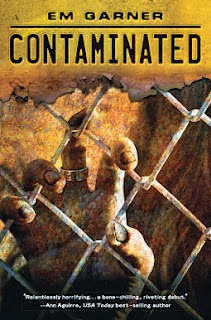 After the Contamination—an epidemic caused by the super-trendy diet drink ThinPro that turned ordinary citizens into violent, uncontrollable creatures—the government rounded up the “Connies” to protect the remaining population. Now, two years later, the rehabilitated are being allowed home, complete with shock collars that will either control, or kill, them.Velvet Ellis has struggled to care for her ten-year-old sister since her parents were taken in the round up. When she finds her mother in one of the “Kennels,” Velvet resolves to do whatever it takes to put her family back together. But the danger isn’t over. It’s beginning all over again…

Gritty and grabbing, Velvet is a harrowing, emotionally charged novel for fans of Carrie Ryan and The Walking Dead.

When I first saw this book on Netgalley, I immediately thought zombies and since I’m a huge zombie fan, I requested it. I have to say that this book was not what I was expecting at all, although that could be my fault since I normally don’t read summaries. While this book was good but it wasn’t exactly what I was hoping for.
Contaminated starts off with Velvet (Our MC) in a ‘Kennel’ searching for something. When I saw the word ‘kennel’, I immediately thought of dogs. But, I quickly found out that dogs were nowhere near close to what Velvet was searching for and she’s actually searching for her mother who was contaminated.
The contaminated or Connies, are sort of like zombies, only they are not dead and they can’t infect you with their bites. But, they are still very violent and they will take a bite out of you if they get the chance. Also, unlike zombies the Connies can be neutralized to the point where they are considered not dangerous. Once the Connies are neutralized they are sent to the Kennels so that family members can claim them and take them home.
Velvet has been working to take care of her ten year old sister, Opal, since her mom and dad were contaminated. She has been going to the Kennels in hopes of finding her mom since they opened. But once she gets her mom home, she realizes that it’s a lot more work than she was expecting. Velvet is a very strong person, even after her parents were contaminated she pushed on in order to take care of her little sister. Opal is such a sweet girl and I immediately liked her.
Overall, Contaminated was a good read that I would recommend to fans of the horror genre, especially those who like the genre but are a little queasy with too much blood or guts. Even though this book started off slow, it picked up about halfway through. I’m interested to see if this is going to be series, especially after that ending.

One response to “Book Review | Contaminated by Em Garner”