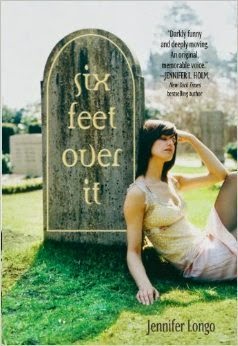 Home is where the bodies are buried.
Darkly humorous and heart-wrenchingly beautiful, Jennifer Longo’s YA debut about a girl stuck living in a cemetery will change the way you look at life, death, and love.
Leigh sells graves for her family-owned cemetery because her father is too lazy to look farther than the dinner table when searching for employees. Working the literal graveyard shift, she meets two kinds of customers:
Pre-Need: They know what’s up. They bought their graves a long time ago, before they needed them.
At Need: They are in shock, mourning a loved one’s unexpected death. Leigh avoids sponging their agony by focusing on things like guessing the headstone choice (mostly granite).
Sarcastic and smart, Leigh should be able to stand up to her family and quit. But her world’s been turned upside down by the sudden loss of her best friend and the appearance of Dario, the slightly-too-old-for-her grave digger. Surrounded by death, can Leigh move on, if moving on means it’s time to get a life?

Six Feet Over It was one of my most anticipated summer reads so I jumped at the chance to be a part of the blog tour for what I was sure would be an amazing story.
Leigh’s story caught my attention from the very beginning.  She is such a strong and vibrant main character.  Leigh is the girl who tries to help out everyone else instead of focusing on her own grief and she puts her own emotions on the back burner, which we all know is not good for anyone.  But even though Leigh puts on this show of being the tough, sarcastic girl in the beginning, as the story goes on we get to see a different side of her.  We get to see the side that she tries to hide from everyone else and this side is so authentic and honest that it was hard not to form a connection with her.
I don’t know that I could deal with everything that Leigh has in her short life.  She loses her best friend, her parents force her to sell grave plots and her older sister, Kai, has cancer and even though she’s in remission, Leigh is still afraid of losing her which is understandable after losing her best friend, Emily.
This story is so deep and raw and it touches on some very emotional issues and instead of shying away from those issues, Longo tackles them head on.  This is a book with a very likeable main character, amazing supporting characters and heart wrenching moments that will shatter your emotions.  Longo’s debut was everything I was hoping for and I’m sure we’ll see more amazing things from her in the future.

Jennifer Longo’s debut novel SIX FEET OVER IT will be in book stores, libraries, and your hands Summer 2014 courtesy of Random House Children’s Books, Edited by Chelsea Eberly and represented by the resplendent Melissa Sarver at Folio Literary. A California native, Jennifer holds a Bachelor of Arts degree in Acting from San Francisco State University and a Master of Fine Arts degree in Writing For Theatre from Humboldt State University. She is a two-time Irene Ryan Best Actor award recipient and a Kennedy Center American College Theatre Festival Best Full Length Script honoree for her play, Frozen. After years of acting, playwriting, working as a literary assistant at San Francisco’s Magic Theatre, then as an elementary school librarian, Jennifer told the occasional story at San Francisco’s Porch Light Storytelling Series and decided at last to face her fear of prose and actually write some. A recent San Francisco transplant, Jennifer lives with her husband and daughter near Seattle, Washington beside the water on Mercer Island and her every hour is consumed by writing, running marathons, tide pooling, walking her kid to ballet class eleven thousand times each week and reading every book she can get her hands on.

3 responses to “Blog Tour Review : Six Feet Over It by Jennifer Longo”