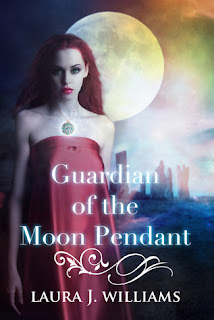 The MacAlpin women are of a fierce clan, born from a rare bloodline that harbors a dark and powerful secret – a mystical heirloom called the Moon Pendant. It is the key to controlling the MääGord standing stones, a magical Portal into the Otherworld, the realm of the Fae.

Anabel’s life is going precisely according to her plan, a ring on her finger from her steady beau, Edgar, and medical school in the fall.

Izzy’s life is filled with scars and wounds from her past. Dubbed the “spare child” by her family and treated poorly, she rebelled, and now lives life by her own rules.

These two sisters’ worlds are about to explode when one of them must go to Scotland and fulfill her duty as the Guardian of the Moon Pendant, by recharging this magical heirloom with four elementals, air, earth, water, and fire, and then finally close the Portal.

There’s only one problem…

The Baobhan Sith – a vampiric faery who lures men in with her hypnotic voice, feeding on their blood or transforming them into Màrmann, her zombie-like warriors who do her bidding – desires the Moon Pendant to take control over the Portal, opening a gateway into the realm of man, helping her to seek revenge on the MacAlpin clan, and to quench her eternal thirst for human blood.

Anabel finds herself torn between a sinfully handsome Scottish warrior, Blane and her fiancée, Edgar. Izzy finds herself, angered by her sister’s lack of faith in her.

Both sisters are forced to help one another, but may end up killing each other in the end. Surrounded by an array of good and evil Scottish Fae like a vampiric faery, the Baobhan Sith, zombie-warriors, the Ankou, Dryads, the Fachan, the Ghillie Dhu, Heather Pixies, Leigheas, the Nuckelavee, the Bloody Baron a Red Cap, Stone Faeries, Trows, and Will-o’-the-wisps.

Will these two sisters put aside their differences before the final task to charge the Moon Pendant and close the Portal or will the Baobhan Sith, the vampiric faery, be successful and open the Portal into the Otherworld?

That’s when I saw him, the Ankou, a collector of bodies, the man they call death, cloaked in darkness, standing beside a smoldering motorcycle, his sidecar a coffin made of bones. A skeleton of a mangy dog sat obediently, wagging its scrawny tail inside the sidecar, a black tongue lapping out of its mouth, panting hard, its fur patched randomly about his body, exposing its shriveled skeletal frame.
The Ankou’s eyes were sullen, black, and fixed onto me. “I’m just here for the body,” he stated in a low raspy voice, tapping the base of his scythe on the soft ground, holding it like a sword in his withered hand. “The spirit’s not my jurisdiction.”

Be sure to check out the other stops HERE

4 responses to “Blog Tour: Guardian of the Moon Pendant by Laura J. Williams”